Duncan Archer does 18hr51 for Bob Graham Round

The short version:  I did the Bob Graham Round on 6th June in 18hr51.  It was very windy.  For the longer version, read on…

What is it:  The Bob Graham Round is a circuit of 42 named peaks in the lake district, starting and finishing at Keswick Moot Hall.  The challenge is to complete it in 24 hours.  It covers about 66 miles with 27,000 ft of ascent (that is about 8000m – not far short of climbing Everest from sea level).  It was first completed in 1932 by Bob Graham, nearly 2000 people have completed it since and joined the Bob Graham Club.

My round:  The BGR first came onto my radar 5 or so years ago, when I started running with Durham Fell Runners, and others in the club were talking doing it (“obsessed” with it…?).  I followed their progress, saw happy successes and tough failures, helped out a bit, and the seed was planted in the back of my mind that one day I might do it.  However for several years it never fitted alongside other interests, particularly orienteering and mountain marathons, and knowing it would need good preparation and result in not much activity for several weeks after!  However at the start of 2015, whilst getting over an injury from the 2014 OMM, I decided it was a good focus for the coming year.  As the year progressed I was struggling to see where it might fit between other races and commitments, but then the LAMM was cancelled, which created the ideal weekend to aim for.

Style:  My dream would have been a low key round, running solo and unsupported, no pre-practice / recce-ing, and navigating “on-sight” (map and compass, no GPS!).  However, I’m also attracted by the history of “Bob Graham Club”, and getting your name on the list of successful completions, and that requires at least one supporter on each leg to confirm you reached the summits.  Even so I never intended to do endless recces and learn the route by heart.  A big attraction of running in the hills to me is discovering new places, finding solitude, occasionally getting lost and then finding yourself again.  So how much practice did I do over previous years?  Leg 1 about three times, leg 2 in its entirety only once, leg 3 about four times, leg 4 only once (two weeks before my attempt – I thought I really ought to!), and leg 5 never.  I’d been in the lakes on many other occasions, and had visited various BGR summits, but without the BGR in mind.  However I’d never been up Hindscarf or Robinson until the day of my attempt, so it was quite fitting to finish on two new summits for me (and motivating to have to get myself that far!).

Target pace:  I wanted to not just complete, but do a time I would look back on and be happy with, feeling like I’d pushed myself.  On the flip side I wanted to balance that with not pushing myself too hard and increasing the risk of blowing up and failing, because I really didn’t fancy making multiple attempts!  I decided on 20 hours, for no particular reasons other than it felt achievable, somewhat faster than 24 hours, not record breaking, and a nice round number!  If you look at the stats, nearly 2000 people have now completed the BGR, Billy Bland’s record is 13:53, Mark Hartell and Stuart Bland have done just under 15 hours, I’m not sure anyone else has done under 17 hours, a sub-18 hour round puts you in the top dozen or so, another 20 have done sub-19, and another 40 have done sub-20 (information from here and extrapolating for another year).  So I set off with a 20 hour pace, although in the back of my mind I thought if things felt ok around Scafell, I might try to pick it up a bit.

Schedule:  Most people use the excellent calculator on Bob Wightman’s page.  However, some advice suggested it was largely based on timings people actual take, and most people set off too fast and slow down significantly (and painfully!).  You are better (i.e. it’ll be more pleasant!) to hold back early on and keep a more consistent pace.  So I used what the calculator said for a 21 hour pace for legs 1&2, 20 hour pace for leg 3, and 19 hour pace for legs 4&5.  With an overall 20 hour pace, on a weekend in June, you can do most of it in daylight, so I went for a 3AM start / 11PM finish, allowing for a few hours’ sleep beforehand.

Running preparation:  This really started over 25 years ago, not specifically for the BGR (!), but since then I’ve spent many hours running in the hills, including much of it in rough, heathery and rocky terrain, particular when orienteering.  I’m sure that helped.  In the last 5 years I’ve trained to compete more seriously in the elite class at mountain marathons, including an OMM elite victory in 2011 with Shane Ohly, and 3 successive LAMM victories with Jim Mann in 2011, 2012 and 2014.  In the last 6 months I’ve aimed for consistent training, with a long steady run (I’m talking 3-6 hours) every few weeks.  It hasn’t all been easy, including several weeks ill with colds etc. over the winter, one serious bonk on a 50k run on my own in the Cheviot (didn’t take enough food), and two very brisk outings with Jim, once on one of his Paddy Buckley Round attempts in poor weather, and again in the Old County Tops race.  But it all helped.

So to the actual thing.  The weather forecast a week out looked good, a high pressure dominating the country, meaning low winds, dry, and possibly too hot if anything.  As the week progressed it looked like a front would pass over the Lakes leading to high winds.  How right it was.

Leg 1:  With Mike Mallen. Mike lives in Keswick, and had kindly offered a bed for a few hours’ sleep the night before.  Starting at 3AM on a Saturday morning in Keswick means avoiding the odd reveller as they spill out of the nightclub, and acknowledging the cheers of “What the fuck is going on?”  What indeed.  The wind first hit us on top of Skiddaw like an express train.  However, we were 5 minutes up, and I felt ok.  The climbs of Great Calva and Blencathra passed uneventfully, and I skipped merrily down Halls Fell Ridge on dry rock (a benefit of high winds!) in just over 3 hours, which was 25 minutes up on schedule.  Was I going to pay for this later?.

Leg 2:  With Gwynn Stokes.  Except due to my early arrival he was not to be found at Threlkeld.  He turned up soon after and we were off.  As we crested Clough Head the wind hit again, and there followed the toughest 3 hours of running / shuffling / stooping / clinging to rocks that I’ve done in a long time.  The westerly gale hit the Helvellyn Ridge side on and was funnelled at great speed over the edge.  Gwynn’s cap is now somewhere off the edge of Dollywagon, and as I was chuckling at his misfortune I discovered I wasn’t wearing my hat any more either!  We persevered and eventually made it to Dunmail, even taking another 10 minutes off the schedule – but how much energy had it take out of me?  I certainly felt very drained at this point.

Leg 3:  With Andy Blackett and James Osborn.  We lost a few minutes on each of the first few hills, and I wondered if this was the start of the end.  But once on High Raise my mood brightened, and with Andy’s mantra – “take it one hill at a time” – things started to pick up.  A novel route up Harrison Stickle brought some brief scrambling fun.  Into the mist up Bowfell which lasted until the end of the leg.  Nice to see friends Pete and Jen Murphy on the way up Scafell.  And another man who was waiting for some runners, we exchanged names and he exclaimed “Wow, you are the 20 hour man”.  Famous?  We took Scafell via the climbers traverse round the east buttress (to Foxes Tarn).  By the time I was skipping down the scree run off Scafell my mood was brighter than it had been 5 hours earlier, and we were now 50 minutes up on schedule.

Leg 4:  With Jim Mann.  My favourite leg (despite only having done it twice now), with some nice trods (you just have to look past the slog up Yewbarrow).  The weather was still windy, but at least you could stand up straight (usually), and there was the odd glimpse of brighter weather down Ennerdale and across to the leg 5 hills.  I was feeling ok still, just taking it a hill at a time, and keeping on eating and drinking as prompted by Jim.

Leg 5:  With Patrick Bonnett.  I left Honister exactly 1 hour up.  Jim’s parting words were whether I was going to try to go sub-19 hours.  I said I wasn’t really bothered, and he told me to think carefully about whether I’d still be thinking that at the end.  Now Patrick is seemingly a veteran leg 5 supporter, having helped many people round these three last hills.  He remarked it was nice to have someone who still had a pulse at this stage, and encouraged me to take in the view from Dale Head from where you can see most of the rest of the journey you’ve just undertaken.  His chat kept my mind off the tiredness, and his chocolate bars made a nice change from chewy energy bars (which ironically I no longer had the energy to chew).  4 minutes lost up Dale Head, but gained again on Hindscarf, and at Robinson we were still on schedule. I had no idea how generous or otherwise the 80 minute split was to Moot Hall, but with Jim’s words in the back of my mind I decided yes, 19 hours was now the target (funny how you attach significance to a completely arbitrary number).  We just kept a nice even pace off the ridge and along the road.   It was still breezy but otherwise the weather had brightened and turned into a lovely evening, something to savour.  Eventually we turned into Keswick, through the market place where most of my supporters had come to cheer me in, and up the steps of Moot Hall.  18 hours and 51 minutes.  Phew!

Huge thanks to everyone who ran with me on the day.  Special thanks to Pippa for supporting me at the road crossings, all her encouragement in the lead up, and tolerating me going running for many hours in the hills, when I know she would love to be out there too. 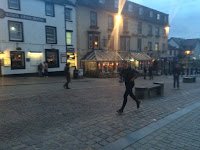 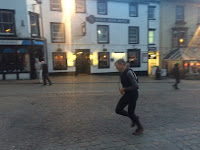