“I don’t want to get to the finish in second place feeling like I could have tried harder.”  These words from Shane are ringing in my ears as we struggle up a long rising traverse, the last significant hill on day 2 of the Original Mountain Marathon 2016 in Galloway.  We alternate between “maximum shuffle” and hands-on-knees walking up steep grass.  It is a long leg, 5 miles long in fact, with some route choice.  Overnight we had been lying in 1st place on the elite course with nearly a 20 minute lead, but anything can happen in a chasing start.  Maybe Nic and Jim in 2nd took a better route round the forest roads and are overtaking us?  All we can do is get our heads down, shovel some more food in, and keep pushing.

Rewind the clock – how did we get to be in this position?  This time last year it was the usual story.  You do the OMM (the fourth time on elite for me with Shane), you don’t quite get the result you wanted, the next day you have trouble even walking down the street, and wonder if it is all worth it.  But as days turn to weeks and months those memories fade.  Then the insistent promotional emails from OMM start arriving in your inbox, with photographs of glorious rolling hills for next year’s race.  Maybe it wasn’t that bad after all?  So you enter again.

2016 saw the event return to the Galloway Hills in SW Scotland, as apparently it does in every year ending in a 6.  The perceived wisdom was that this was rough terrain, tussocks up to your armpits.  Great says Shane, this will play to our strengths Duncan, the rougher the better.  Well maybe years of orienteering stand us in good stead, but it isn’t going to be pleasant.  The event gets closer and I put a previous map of the area on the wall next to my desk at home (is that normal?), so I have a choice of getting on with some work or gazing at wiggly contours and imagining those tussocks….

Three months before the OMM I get an email from Jackie at British Orienteering.  Apparently the OMM have invited orienteering teams from different nations to take part, the event will be covered by the BBC Adventure show, and this is a good opportunity to promote orienteering and get some publicity.  Some discussion ensues about how to go about this, but eventually British Orienteering put forward Shane and I to represent them at the elite end of the race.  In the end neither the OMM or British Orienteering actually do much publicity beforehand, but we get some promotional jackets with GREAT BRITAIN emblazoned on the back.  Shane is over the moon about this.  They are for the podium apparently.  I guess we better do our best to get there. 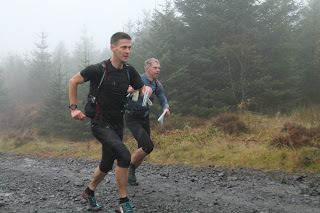 Eventually the weekend comes around and we turn up with that nervous anticipation you get the night before a big race.  A good night’s sleep in Shane’s van, then a long 5km walk to the start in quiet contemplation.  Bjorn and Sebastian, a strong Swedish team, one of whom beat us into second place in the Howgills, comes jogging past uphill.  Come on guys, we haven’t even started yet!  We end of getting away just in front of them (no allocated start times) and we are off.  Into the mist, right from the start it is tricky, bumps everywhere, we desperately search the map for clues, but I know these hills are too small to be on at 1:40,000.  So we trust our instincts, and our compasses, press on and eventually #1 looms out of the mist.  One down.  Later we discover other teams lost significant time here.  #2 is a long leg and we are happy with our route choice, up and over Merrick (no view).  #3 I’m hesitant on the approach, but Shane confidently stashes his compass and uses “the force” to guide us in – strangely it seems to work as we hit it bang on, and climb out to find others circling back to it.  Having started late we are passing teams, some of them decent teams, and we feel like we are going well.  No sign of the Swedes catching us, and reports that Jim and Nic (strong contenders for the race and beating us last year) aren’t far ahead.  We chat with the leading girls team, Jess and Kerstin, as we pass them on the way up a hill, then into the mist once more.  But then I’m disorientated, lose confidence, and a minute or two searching for #4, finding it just as the ladies navigate cleanly into it.  Bother.  Off again at speed vowing to pay more attention.  On exit from #5 someone familiar is coming towards us – it is Jim and Nic, having made a mistake and we are now a few minutes ahead.  The race is on!  We take what feels like another solid route minimizing climb to #6, with frequent glances over our shoulders.  Eventually Jim and Nic catch us again at #7, there is some friendly chat on the way to #8, but then someone turns on the boosters.  90 minutes of hard work follow as the pace is wound up over the final few controls.  We keep on pushing, and eventually Shane and I pull away on the last descent.  The final road and track seem interminable but this is the time to put a few more minutes in the bag.  What a day.  I seriously never thought we’d be leading overnight.  I thought I was less fit than previous years, but maybe I was just well rested?! 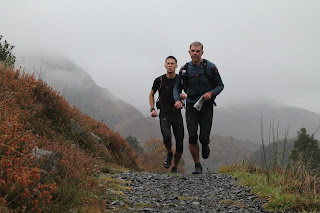 Time for a nice relaxing evening and a good night’s sleep.  Ah my mistake, we are at the OMM, where you spend an extra hour in a slightly damp and flapping tent because the clocks go back, just waiting for the alarm to go off.  Actually it wasn’t nearly that bad this year.  We alternate between piling in the calories (a few new food ideas now Shane is vegan), dozing, rehydrating, strolling round the campsite chatting, doing some media interviews, the usual stuff!  It was probably the warmest night I’ve known at an OMM, must be a combination of all that mist keeping the heat in, and the luxurious bubble-wrap underlay in the tent. 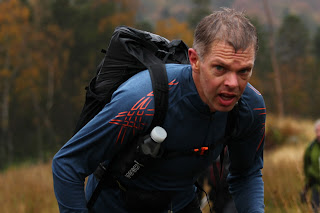 Next morning the legs feel ready to go, we’re excited to be off, just need to keep focussing on navigation, running, eating and drinking, try not to think about the competition chasing us down.  Our biggest mistake, really just a wobble in the circle, comes at #7 under the watchful eye of a film crew with a drone buzzing overhead – should provide some entertainment if they every air it.  And then we are into that long route choice leg to #9….  “Have any elite teams come through yet?” Shane asks the marshal at the next control.  He shrugs his shoulders.  So we keep pushing through the final controls in the woods.  Just after the last control is a cameraman and a friend from Trail Running magazine – “Have Jim and Nic come by?” asks Shane.  “No!”  Shane: “Ah thank f&%*” (all caught on camera) “How are you doing?”  Me: “Knackered”  Shane: “We’re very tired”  That sums it up really.  Tired but very happy.  A second win on elite at the OMM.  There was some discussion that we might not do another elite after this one.  But then someone pointed out next year is the 50th OMM and promising to be something special.  We’ll see…. 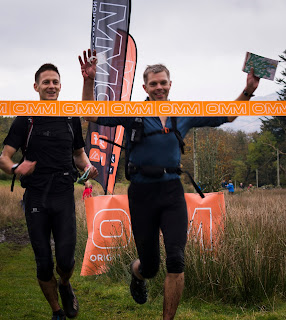 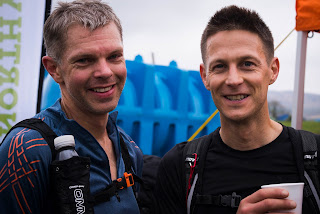 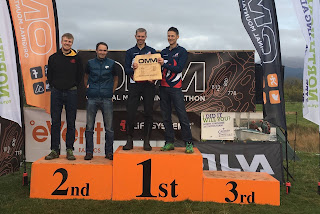