“I think this is the right place?”  We peer over the edge, contemplating a committing 90m free hanging abseil (so the guidebook says – our rope is 100m), onto a platform that you can’t see from above (hopefully non-tidal…), to do a three pitch E2, which some others did yesterday but said the bottom pitch was “dripping wet”.  The easiest way out is E1, assuming we are in the right place...  Welcome to climbing on Pabbay!
Pabbay is a small island at the southern end of the Outer Hebrides.  It has been uninhabited since the early 20th century.  A few years earlier a storm killed most of the adult male islanders on a fishing trip (legend says their wives dreamt this would happen, and there is a 3-star classic route “Prophecy of Drowning”), and with diminished prospects of subsequent generations (!) the rest of the population decided to leave. 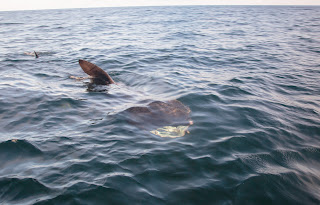 A basking shark right beside the boat on the way out (credit: Ali Rose)

Along with neighbouring Mingulay (also uninhabited), it has become something of a Mecca for adventure trad climbing, with up to 100m high sea cliffs of steep and featured Lewisian Gneiss (“nice”!).  Getting there involves a 5-hour ferry from Oban to Castlebay on Barra, then chartering a local fisherman to take you plus supplies on the 1-hour trip to the island (booked ahead).  Pippa and I went this August, with half a dozen others, organised by some guides Pippa met whilst in Antartica, and various friends of friends (a reasonable sized party is recommended for safety!).  There is no mobile phone signal, and you genuinely feel “out there”, with just a few tourist and fishing boats passing by, and daily sightings of seals keeping a watchful and curious eye on the climbing antics.  The only connection with the outside world was our marine radio on which a mayday might get picked up, and we could receive the shipping forecast each day. 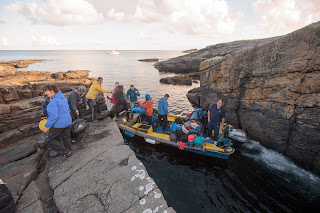 Eager climbers unloading a mountain of kit on the island (credit: Ali Rose)

The fisherman dropped us off on a beautiful Saturday evening, bid us farewell, and said he’d be back for us at 5pm on Friday.  After rapidly erecting tents, with tomorrow’s forecast suggesting rain, and like kids in a sweetshop, we immediately marched across the island to get a first route in.  Awesome!  Next day was indeed showery, we got just two pitches between showers, and I went for a run round the high points of the island.  I also tried to tighten a guy rope, and ripped a hole in our flysheet – but initial panic and influx of driving rain were tempered by some creative duck taping!  Then followed three days of excellent weather, light winds and sunny.  Awesome routes were dispatched, like The Priest, a 3-star E1 classic up the side of the Great Arch, an amazing rock feature. 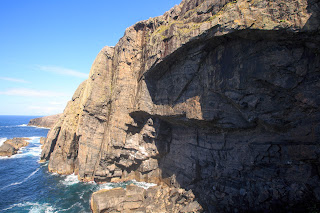 Spot me in a green jacket on The Priest, an insignificant dot alongside the enormity of the Great Arch (credit: Ali Rose)
On to Wednesday.  As we started up a route our fisherman’s boat chugged round the corner.  Tourists swung their cameras from the seals to us dangling off the rockface, as the fisherman’s thick Hebridean accent drifted across to us.  The weather would be deteriorating, and he could either pick us up tonight, or we’d have to wait until Saturday as the sea would be too rough to land.  He’d meet us back in the bay where we were camped at 6pm or so for a decision.  Not unreasonable except we’d just done this 90m abseil, and didn’t top out until 5:30pm.  Pippa ran across the island to find the others, attempted to get a consensus on whether we should stay or go, and then to meet the fisherman.  She arrived at the bay just to see him pulling away soon after 6pm, having taking our absence from the meet-up as a decision to stay.  With no means to contact him, that was that.  We nervously listened to the shipping forecast that night.  Tomorrow was ok to start, then deteriorating to gale force 8 overnight.  There ensued debate on the precise meaning of shipping forecast terms such as “imminent”, “soon” and “later”, and how high were the waves in a “rough”, “high” or “phenomenal” sea state, but it was clear we’d need to baton down the hatches.
Thursday dawned dry, and turned out to be another good days’ climbing, but to the backdrop of increasingly rough waves crashing below us.  That night the wind and rain arrived.  Our tent flapped and flexed, but was tolerable, just leaving us in a puddle of damp clothing and sleeping bags.  Others fared less well, with one tent completely flattened, its occupant decamping to a bivvy bag in our mess tent, which was then also flattened with broken poles.  Everyone eventually emerged to survey the destruction next morning, and dry out.  The mess tent was patched up (more duck tape).  Discomfort the night before turned to a sense of satisfaction we weathered the storm, and were armed with stories to tell.  And despite originally wanting to leave before the storm, we ended up with more climbing on Thursday and Saturday, and overall glad we stayed. 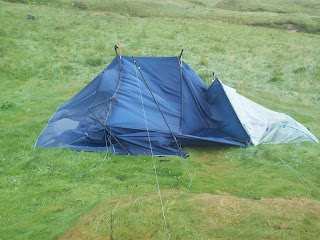 The mess tent after the storm (credit: Duncan Archer)

So back to the climbing, it really is great.  The rock is steep, but good holds emerge when you need them (depending on your grade and definition of “good”!).  You want to be climbing at HVS or above to get the most out of it, and there is plenty for those seeking even higher grades.  It is adventurous, but the rock is mostly solid on the classic lines, and although nearly everything needs an abseil, many cliffs you can view before you jump in.  See a list of our routes here (5th – 12th August 2017).  Highlights for me were the Priest on the Great Arch, U-Ei (the 90m free hanging ab), Spring Squill, and most pleased to lead Illegal Alien a sustained HVS. 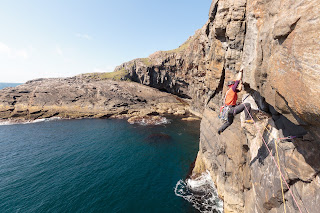 Pippa cutting loose from huge jugs on Hyper Ballad, a bonus route the day after the storm (credit: Ali Rose)

Tips for packing: take as much food and as many comfort items as you can carry (you only have to lift them a short distance on/off boats and 100m from landing to camping); a large tent for the whole group (great for evening socializing and rainy days); a camping chair (much more comfortable than sitting on the ground / bags / ropes); duck tape for emergency repairs; 100m abseil rope; ascenders for emergency retreat/rescue (thankfully not needed); marine radios (including enough battery power!); standard trad rack and double ropes.  My Hangar 18 down jacket, sleeping bag and beanie were also much appreciated to keep me warm!
If you want an adventure, I really recommend going here.  The climbing is great, and there are so few places in the UK where you can truly get away from any electronic interference in life, and just eat, sleep and climb.  Bliss. 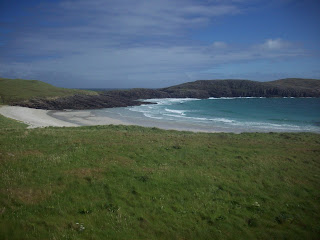 The white sandy bay by the campsite on Pabbay - anyone for a swim? (credit: Duncan Archer)